11th Doctor Cosplay and a TARDIS Llama. Yes, You Read That Right

Update (1-5-17):  This post might be a few years old but the awesome Whovian in this picture (Caitlin Thiele) just sent me an email saying that this was her and her 4-H llama Princess.  We finally know who they are!  Thanks Caitlin!

Doctor Who cosplay is quite common these days whether it is some amazing TARDIS cosplay or some Weeping Angel and Dalek cosplay.  However, until now, I don’t think I have ever come across any Doctor Who cosplay that has involved an animal.  Actually, it seems like I saw a corgi dressed as the 11th Doctor at one point but this is definitely the first time I have seen a llama dressed in cosplay before.

I’m not sure who this person is or the name of the llama, but they make a great pair in this Doctor Who cosplay!  The 11th Doctor cosplay is quite good but I am more blown away by the llama in TARDIS cosplay.  I guess I am now one step closer to having seen everything.

If anybody thinks they can do better than a TARDIS llama, I want to see it!  I am really hoping somebody is able to dress an elephant in a TARDIS costume because that would be cool. 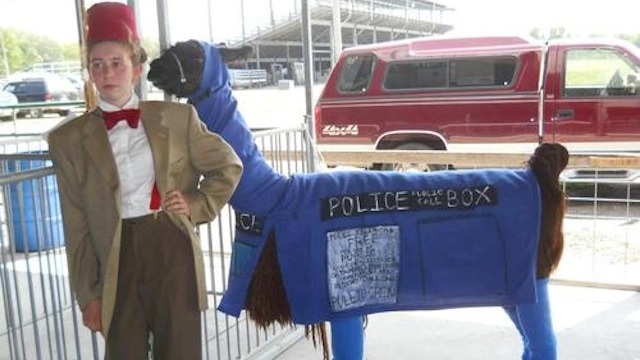