While I have never had a run in with any myself, I have always heard a lot of stories about the Hell’s Angels motorcycle gang that make them seem like quite the scary bunch of dudes.  And while I am sure I definitely don’t want them coming after me, I would be much more afraid of the Weeping Angels coming after me!  At least with the Hell’s Angels, I wouldn’t have to worry about trying not to blink.

The amazing folks over at BustedTees are selling this Weeping Angels Biker Club t-shirt for only $20 (and normally if you sign up for their newsletter assuming you haven’t already, you can get a nice discount)!  If you are a Doctor Who fan with attitude, this is definitely the shirt for you!

Join the brotherhood of the Weeping Angels and get this shirt now!  Just remember the club motto, don’t blink!

Share this with any Doctor Who fans you know!  Also, if you are a Kindle owner like me, help support us by subscribing to have Fanboy Fashion delivered directly to your Kindle! 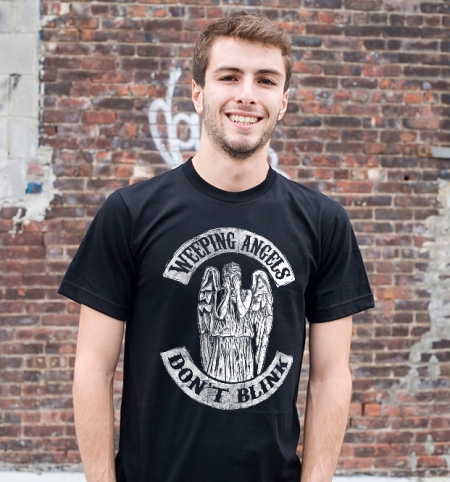