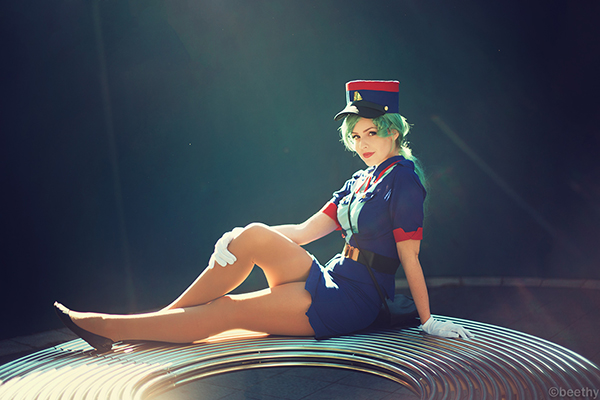 It has been a long time since I have watched the Pokemon cartoon, but I used to love coming home from school as a kid and watching it in the afternoons.  I already loved playing the games before I got into the cartoon but the cartoon was pretty good as well.  However, over time I just stopped watching it for the same reason I stopped playing the games (until the latest X/Y release) and that was because I didn’t care for all of the new Pokemon.  I guess I just have a bit of an connection with the original set of Pokemon and adding more beyond that never really set right with me.  Well, speaking of the original Pokemon and characters, I stumbled across some awesome Misty cosplay that I thought you guys would like!

Ryuu Lavitz Cosplay is the fantastic cosplayer sporting this adorable Misty cosplay that even features her beloved Pokemon Staryu.  The photographer for these awesome pictures was Jim Brady.

Both the Misty cosplay and the Staryu look great in my opinion.  She actually looks a lot like a girl I know except her skin is a little lighter, her legs aren’t as long and I’m pretty sure that hair is a wig.  Otherwise, they would look identical.

Share this with any Pokemon fans and cosplayers you know!  Also, if you are a Kindle owner, subscribe to have Fanboy Fashion delivered directly to your Kindle! 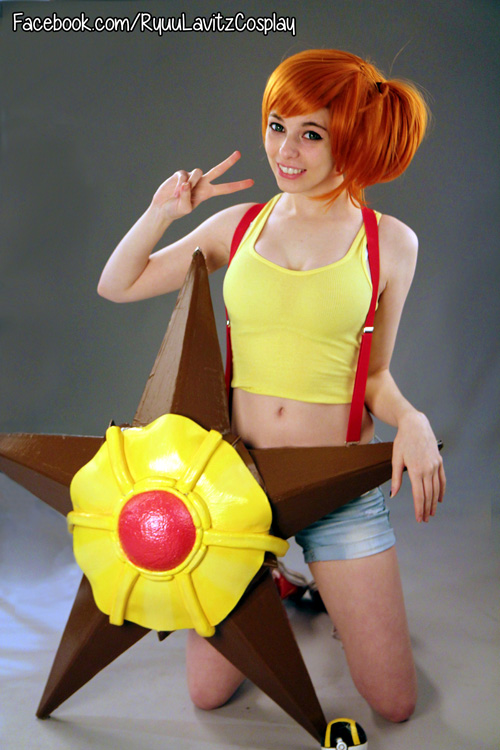 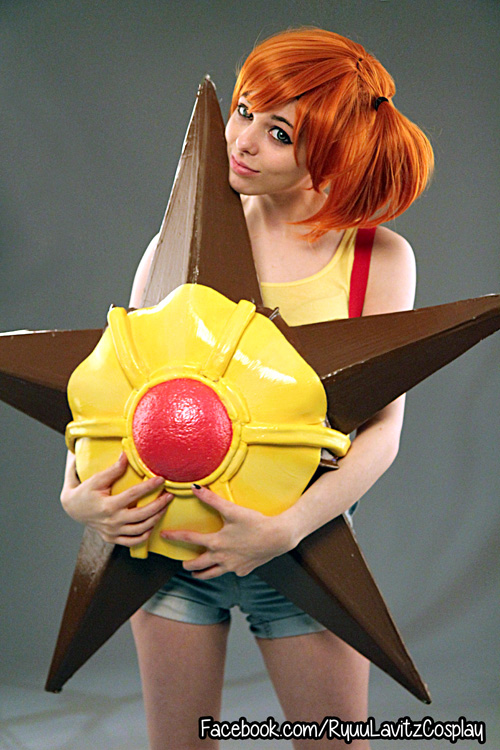 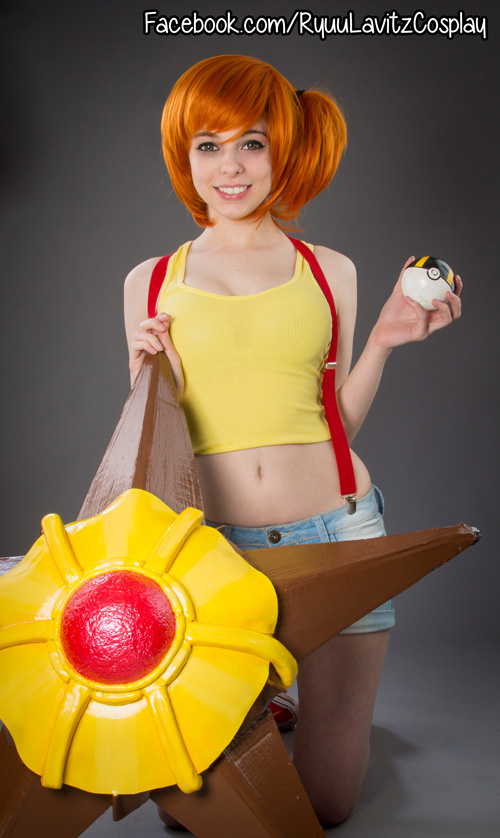 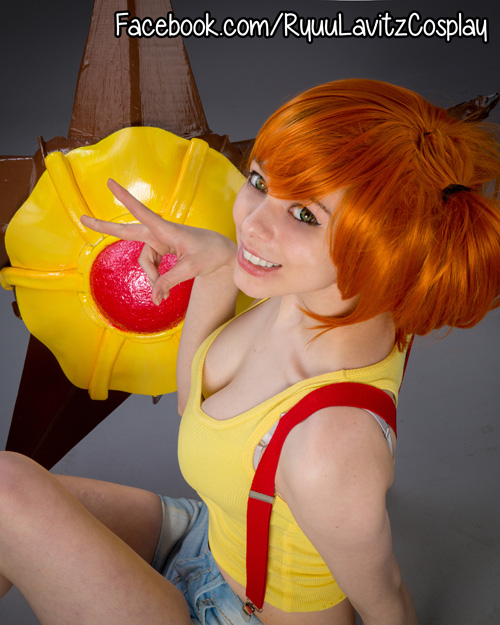 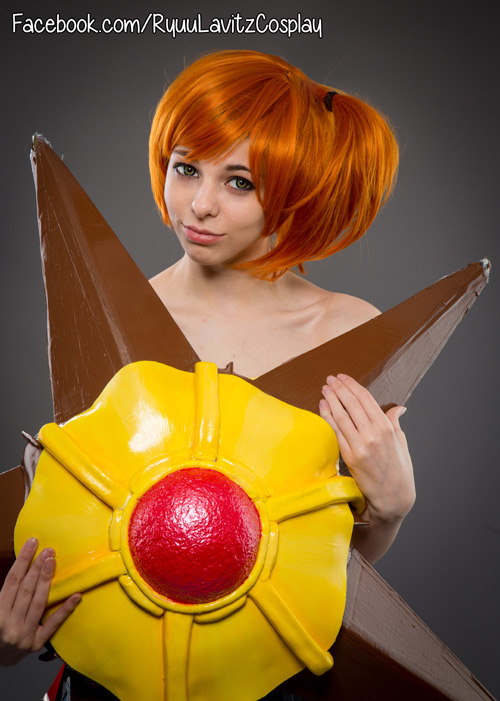 This Sweet Pikachu T-Shirt is $11 Today Only!

Before I get into the meat of this post, I just wanted to take a moment and apologize to all of the awesome Fanboy Fashion readers for having gone MIA for over a month.  I’ve been dealing with some personal things and haven’t really felt like myself enough to post anything so rather than write sub-standard posts, I figured I just needed to take a break for a while.  However, I am finally feeling like myself again and I am ready for things to get back to normal around here so lets get to it!

I have been a big Pokemon fan since I was a kid growing up on the Red/Blue games as well as the card game and cartoon.  However, until Pokemon X/Y came out a week ago, I hadn’t played any of the Pokemon games in years (not for lack of wanting to but the battery in my old Game Boy cartridges died so it wouldn’t save my stuff anymore and I have just been too lazy to crack them open and replace the battery) but I still love them and I really enjoying the Pokemon X, even if I don’t care much for the newer Pokemon.  My how things have changed since I last played in the Gold/Silver days!  Anyway, for my fellow Pokemon fans, I have found the perfect shirt(s) for you!

The awesome folks over at TeeFury are selling this really cool Pikachu t-shirt designed by Whitebison for just $11 today only!  If that isn’t cool enough (this is honestly the coolest Pokemon shirt design I have ever seen), if you order one as well as one of the companion shirts which features either Charmander, Squirtle or Bulbasaur from their gallery, you will also get a cool gym badge!  I should note those t-shirts are $18 but the designs are equally as cool as Pikachu so I think they are still worth it.  Of course any true Pokemon fan will have to collect all 4 shirts! 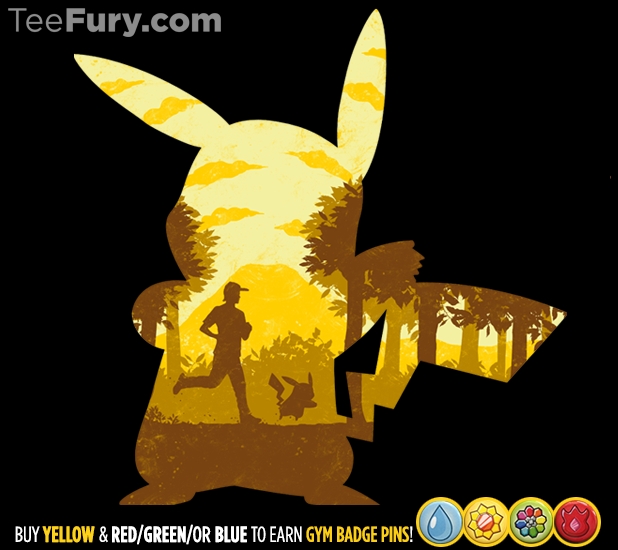 With the new Pokemon games (Pokemon X and Pokemon Y) being released at midnight tonight, I thought it seemed fitting to share a really cool Pokemon t-shirt that is on sale today only.  I can’t say Pikachu is my favorite Pokemon but he is one of my favorites.  If he is one of your favorites, I have a feeling you are going to love this shirt with Pikachu peaking out of a fake shirt pocket.

The awesome folks over at TeeFury are selling this Pokemon inspired Pocket Monster 4 t-shirt designed by ramyb for just $11 today only!  The design is quite cute with Pikachu hanging out in a shirt pocket wearing Ash’s signature hat.

Are you getting one of the new Pokemon games?  Let me know in the comments below! 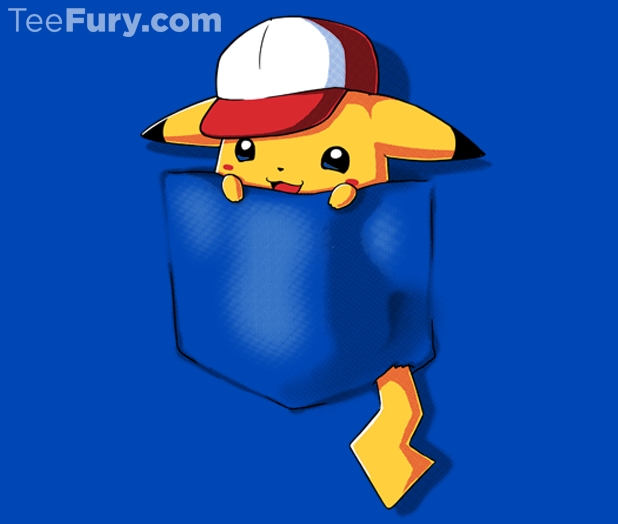 When Pokemon Fans Give Birth [pic]

One of the nice things about being a guy is that I never have to worry about getting pregnant.  I’ve seen countless women go through the pregnancy thing and that just seems like 9 months of hell to me.  Well, some women seem to do a better job than others at embracing the idea of getting ready to shoot out a kid and it seems one of those women happens to be a Pokemon fan.

I don’t know who this awesome Pokemon fan is (if you know, please let us know in the comments below so we can congratulate her on her bundle of joy and Pokemon love) but I love the idea that she decided to paint up her baby bump to look like a giant Pokeball.  The fact that she put the kid in a Pikachu outfit after it was born is even cuter!  However, I do find the red spots on the baby’s face to be a bit redundant as the Pikachu outfit already has them.  It is still a cute idea though! 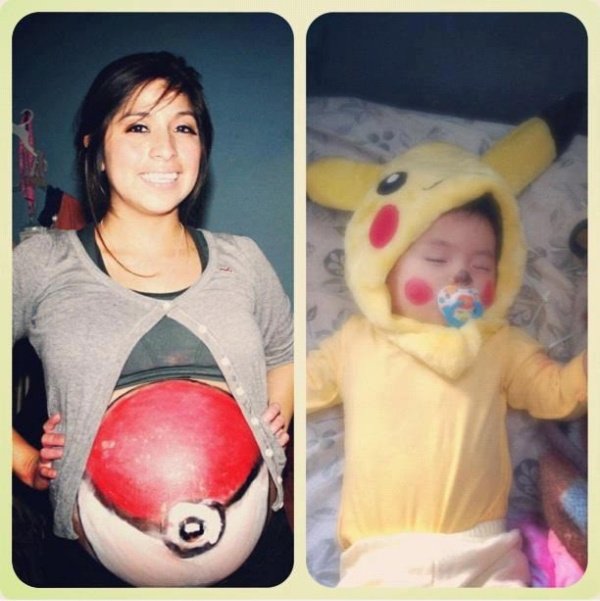 I’ve seen and blogged many custom pairs of shoes that look amazing, but there is just something about this pair of Pikachu shoes that seems special.  I think it would even be appropriate to call them electrifying!

Custom Pikachu Shoes by Bobs Made

I was addicted to the Pokemon cartoon as a kid and because of that addiction, I was always rather fond of the Misty character.  So, when I saw this awesome Misty cosplay picture, I felt the urge to post it.  The Misty cosplay is awesome as it is but including Misty’s Staryu is icing on the cake!  The awesome cosplayer in this picture is SailorMappy and the picture of this awesome Pokemon cosplay was taken by Andy Valentine.  I’m not exactly sure why, but this picture kind of makes me wish that more women wore suspenders. 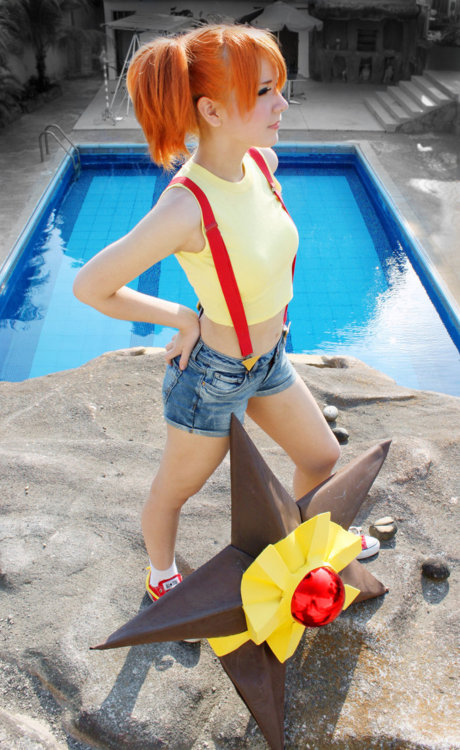 What better way could there be to show your love for Pokemon and napping than with this awesome Snorlax hat?  This awesome fleece hat features felt facial features and can be yours thanks to Etsy seller Herar.  If you think this might just be the awesome gaming hat for you, then you can order this fantastic Snorlax hat on Etsy for just $25!  Good luck staying awake while wearing this hat though! 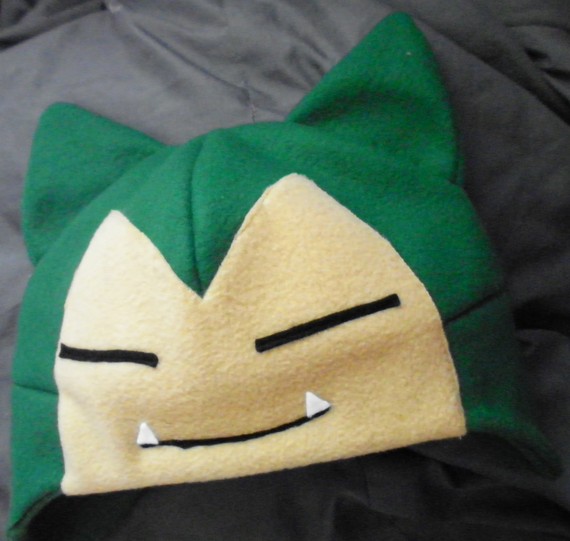 I choose you Pikachu… to be my hat!  I generally avoid wearing anything on my head except baseball caps because hats like this Pikachu hat just look silly on me.  This Pikachu hat is definitely awesome but I can’t even begin to imagine how many people would laugh at me if I wore this out in public.  However, I am sure there is somebody out there that can pull off this Pokemon hat better than me.  Sadly, you can’t buy this awesome hat anywhere as it was made by DeviantART user Clearkid for a friend but I’m sure if you have some arts and craft skills, you can come up with your own. 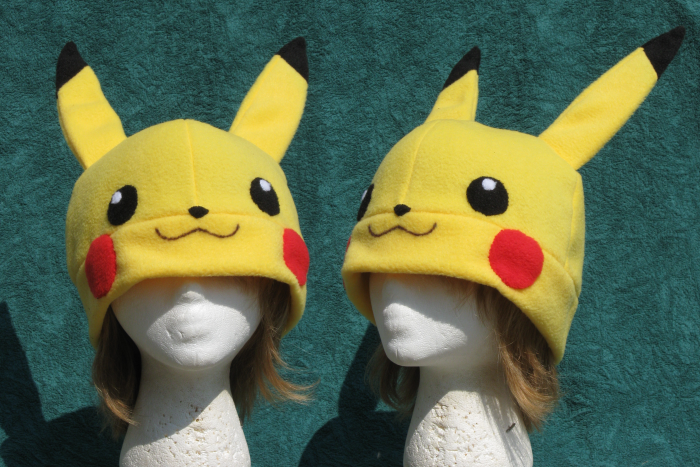 Happy accidents are great, but when you combine them with cosplay, they can result in something amazing!  Louise (Pikachu) and her boyfriend (Ash) were out showing off their love for Pokemon one night when they just happened to bump into another couple that were dressed as Jesse and James of Team Rocket.  Talk about an awesome coincidence!  Too bad there wasn’t somebody there dressed as Prof. Oak.  That would have been an amazing party! 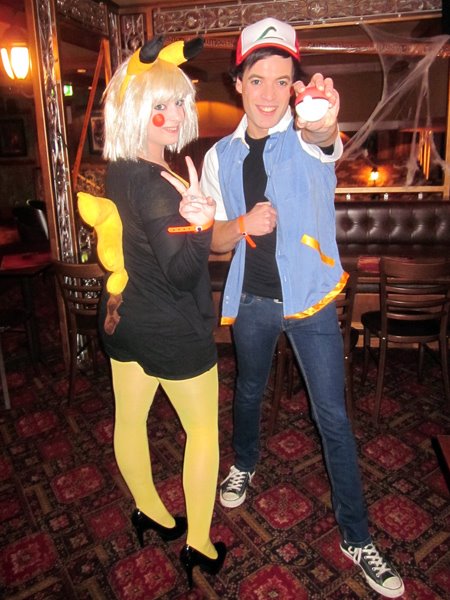 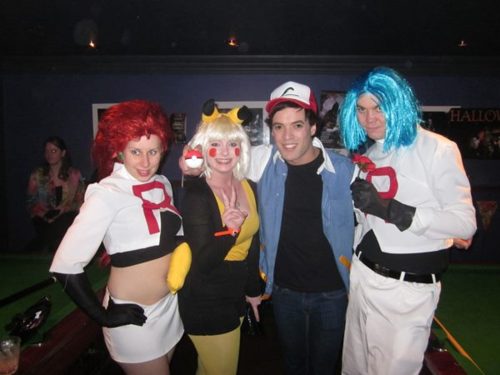