It always irritates me when things I really want aren’t sold in the US, mainly because the cost of getting something imported is insane.  I’ve been known to pay upwards of $45 just to get a DVD shipped from Europe since it couldn’t be found in the US.  Its not very often I have stuff imported (I would quickly go broke if I did it a lot), but sometimes it is just necessary and I suspect that this is one of those times because the Super Mario Bros shoes below are awesome!

These shoes come in red or green depending on if you want the old 8-bit Mario or 8-bit Bowser and the feature a Super Star on the side replacing the normal Converse Star.

Apparently if you can find them in Japan, they are running in the area of 20,000 yen or $195.  At that price, I think I can live without them because by the time I got done with the import costs and everything, I wouldn’t be surprised if the total cost ended up closer to $300 and that is just crazy for Mario shoes.  I will never pay that much for shoes!

Share this with any Super Mario Bros fans you know!  Also, if you happen to be a Kindle owner like me, subscribe to have Fanboy Fashion delivered directly to your Kindle! 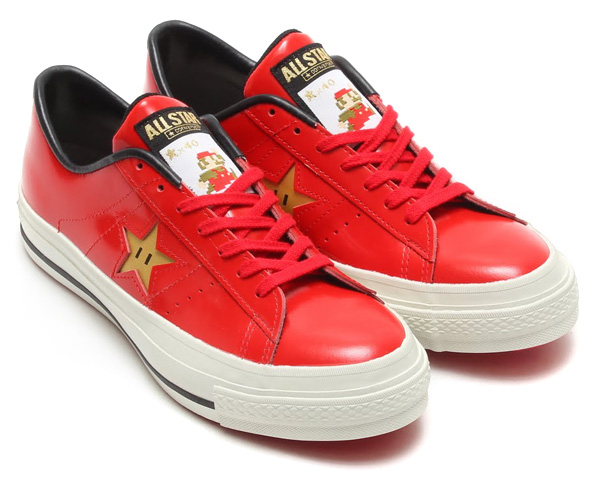 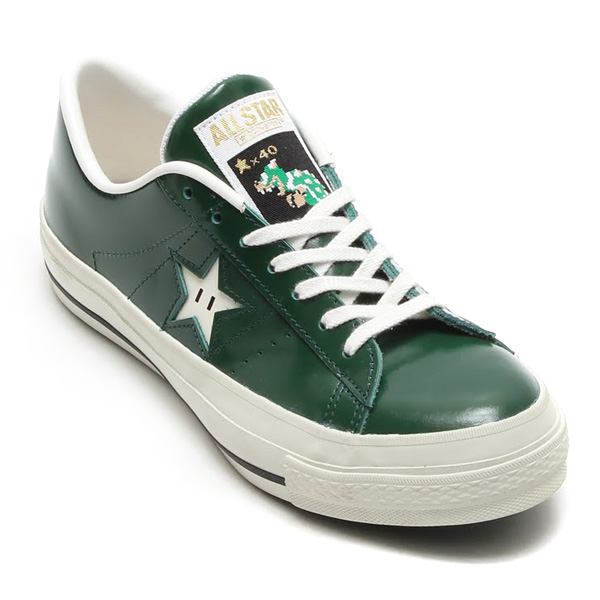 It is rather unfortunate that the styles of shoes I tend to buy from my favorite shoe manufacturer (New Balance) don’t lend themselves to being painted or really customized in any way.  I appreciate that the mesh they use allows my foot to breath but you can’t really customize it and it lets liquid through like its not even there which can be very annoying.  However, for those that like to customize their shoes, there seems to be no better shoe to do that than with some Chuck Taylor All Stars by Converse.

Etsy seller SatansSlippers is selling these hand-painted Doctor Who sneakers featuring the TARDIS and a Dalek for just $64.45.  That is half the price of my shoes and my shoes aren’t even this cool!

Although these are the standard shoes they make, if you want other Doctor Who icons painted on there, they will do them by request so if you want a Weeping Angel and K-9 instead of a TARDIS and Dalek, make sure to let them know when you order! 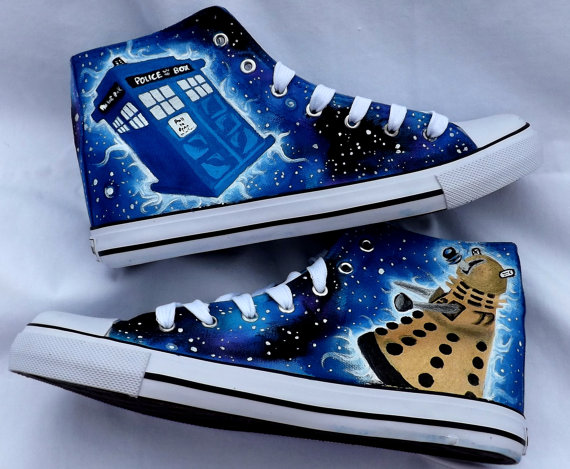 For as much as people seem to like them, I have just never had any desire to try on a pair of Converse Chuck Taylor All-Star sneakers.  I have seen some people make some incredible works of art on them like the Yoda Chucks I posted in the past as well as the really cool Street Fighter sneakers but I guess I just have a hard time convincing myself to change shoe brands.  Considering I order my shoes online where I really don’t have the opportunity to try other kinds like I would in a store, it makes me hesitant to try something other than my beloved New Balance.  Anyway…

Speaking of hand painted Chucks, the fantastic artist over at Bobs Made created this fantastic looking hand painted 10th and 11th Doctor Converse Chuck Taylor shoes.  Whether you are a Matt Smith fan, a David Tennant fan or just a lover of the color blue, I think you are going to love these shoes!

If they sold Doctor Who shoes like this where I get my shoes online (Zappos), then I might be willing to venture out of my comfort zone and try a different brand of shoes.  Until that happens, I guess I will be sticking with New Balance and just loving shoes like these from afar. 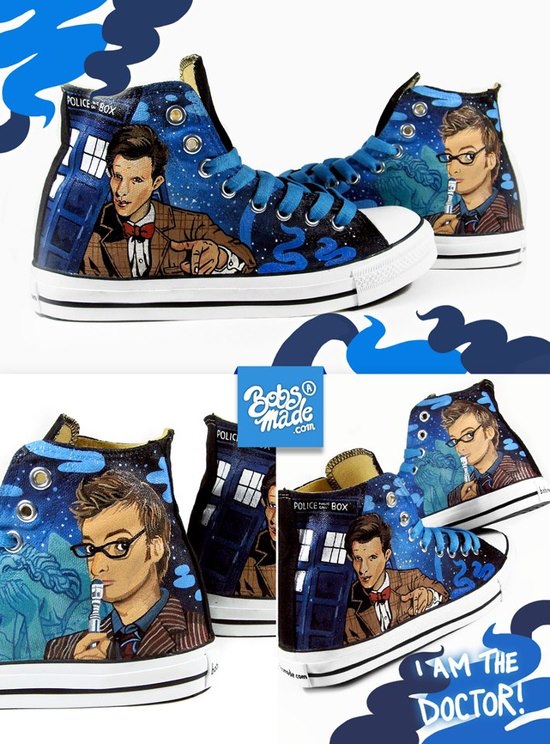 Doctor Who Chuck Taylor Sneakers Who

If you are the kind of person that loves to show off their passions and one of those passions happens to be Doctor Who, then I have the shoes for you!  Check out these amazing Doctor Who TARDIS Converse All Star shoes!

Etsy seller WibblyWobblyShoes (definitely an appropriate name for somebody that sells TARDIS shoes) is selling these custom Doctor Who TARDIS Converse shoes for $115.  The best part is that you can specify the size you need and have these shoes made just for you!  However, since these TARDIS shoes are custom made, apparently they can take up to 6 weeks to ship although if you order now, you should still have them in time for the Doctor Who Christmas Special!

I’m very tempted to order a pair for myself as it is about time for me to get some new shoes, although I have always been a New Balance guy and I don’t know if I would like Converse All Star sneakers or not. 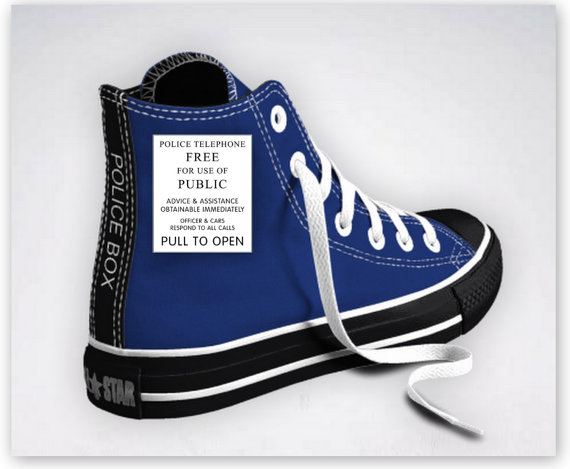 I’ve long wanted something cooler to wear than just what tennis shoe manufactures have to offer, but I know having something really cool like these amazing Yoda shoes wouldn’t be a good idea because they wouldn’t stay nice for very long considering I work in a very dirty environment.

Well, regardless of whether or not I will be the owner, these Yoda Converse All Star shoes are amazing!  The amazing custom shoe people at What’s Shop in Thailand are the ones that painted this amazing pair of Yoda Chucks.  If you would like a pair of your own, they do take custom orders and it is quite obvious that they do amazing work!  I’ve seen a bunch of other shoes that they have made and every pair has blown me away! 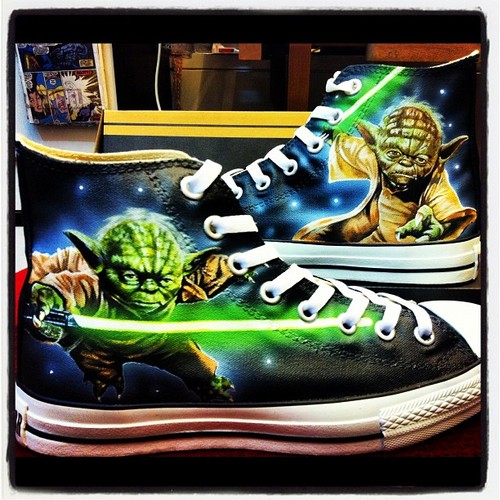 One of my favorite arcade games growing up was Street Fighter which would explain why I want these shoes so badly even if I think Converse Chuck Taylor sneakers are some of the ugliest shoes ever made.  Maya Pixelskaya painted these awesome shoes that feature Chun-Li and Ryu with an amazing level of detail.  These shoes are definitely geektastic!  Too bad you can’t buy a pair of these Street Fighter sneakers at your local shoe store. 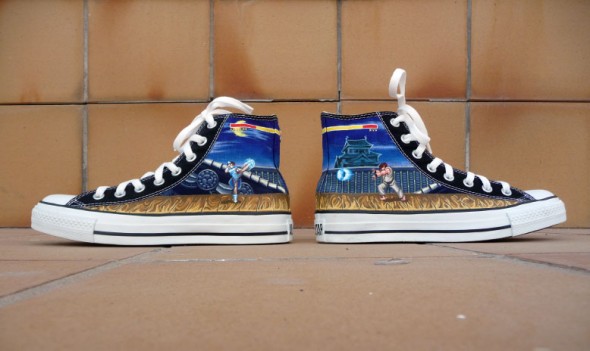